Employees in many institutions show different deviant behaviors due to the existence of injustice in their work environment. Research suggests that employees who perceive injustice in their workplace are more likely to engage in workplace deviance behavior. Distributive, procedural, and interpersonal justices are the main elements of the justice behavior. If an organization fails to satisfy these elements, it is proved that there is an indication of injustice. Therefore, the aim of this study is examine the effect of organizational justice on workplace deviance behavior in the study area. To achieve this objective, an explanatory with cross sectional research design was carried out to investigate the relationship and effect between organizational justice and workplace deviant behavior. The total population of the study was 120 academic and 37 administrative staff in which 30 of the academic staff were excluded for they were on a study leave. For this reason, 104 questionnaires were distributed and out of which 103 questionnaires were returned and used for the analysis purpose. One questionnaire was incomplete and the remaining 23 questionnaires were not distributed because of the inaccessibility of respondents during data collection period, hence excluded from the study. The data were analyzed using SPSS version 21 and the finding of the correlation analysis indicated that organizational justice elements were negatively correlated with workplace deviance behavior. Similarly, the regression analysis result tells us that procedural and distributive justices were a negative and insignificant effect on workplace deviant behavior but the interpersonal justices were a negative and significant effect on the outcome variable 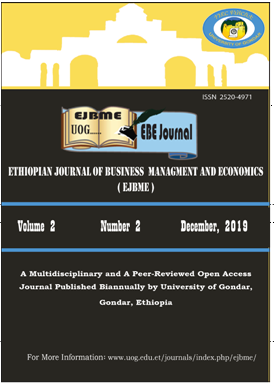